Nature loves ordered chaos. But the human intellect craves cognitive compactness: small, tidy concepts that can be controlled, and put to work in the name of art. What if an artist's subject is not conceptual but is the untrammelled forest of nature's living organisms and their traces. What about art that eschews the lexicon of anthropocentric simplifications? And seeks to engage with nature on its terms? The apparatus of conceptual art slides like a sealing veil over nature's intricate textures, and a quite different approach is called for by a natural subject even so humble as a square foot of ground in Hyde Park.

Mr Smith's self-effacing artist's name reflects the graphical stance with which he engages with nature's manifold of plant debris. He hides himself. Bearing the archetypally ubiquitous British surname of "Smith", with no forename, he allows his micro-pen to map out the limitless detail of the leaves, twigs, seed pods, calyxes, and the passing Durex wrapper. With no visual composition, no narrative, no dramatic tension, no aesthetic editing, Mr Smith depicts a found scene.  What we see in his drawings are little corners of nature, raw and unedited.  Except, of course, that the drawings are not quite as pure and unfiltered as they seem to be telling us. To begin with, Mr Smith has consciously chosen these particular square patches of ground rather than any others. And, as Mr Smith told me at the preview of his exhibition at the Brick Lane Gallery, he removed some larger, distracting items from the scenes depicted in his drawings. For example, in one scene, a block of wood that was just outside the frame of the picture cast a shadow across the picture, which he feared would distract the viewer's attention and leave people wondering, "What's that?" - which might have been a more conceptual artist’s deliberate intention, but would interfere with Mr Smith's aim to show a naïve view of nature. Second, and quite obviously, the original scene would be filled out with a subtly woven tapestry of colours and hues whereas Mr Smith has drawn a black-and-white delineation of form, a graphical maze of edges, contours, and lines of texture—which omits the spectrum of colours.
So, the drawing is not so much a representation of every detail, but rather a gesture of capturing the structure of every form. One result of Mr Smith's painstakingly picking out the boundaries of each object is to emphasise that every fragment has its own separate identity, its own origin and mode of decay—the leaves that shrivel and crack into dust, the branches that are eroded by woodlice and insects, condom wrappers that will last for millennia. Each has its separate visible form and role to play in the life of the park.  Mr Smith honours each scrap of leaf or wood with patience, attention, and reverence. He mentioned to me that he had recently been studying eastern philosophy, and certainly his drawings are suggestive of the notion found in the Upanishads of all life-forms as different faces, or instantiations, of the universal consciousness of Brahman. Indeed all objects, both animate and inanimate, inherit that divinity. It is that notion of the ubiquitous and plenipotentiary presence of spirit in every creeping thing, every twig and shrivelled leaf, that informs Mr Smith's uniformly dignified drawing of each distinct scrap of plant debris on the mud of Hyde Park. He told me that his long and patient rendering of these tableaux of natural disintegration induces in him a sense of reverence. This is fitting for an art-form that observes even the smallest fragment of life with full attention.

Mr Smith stays unprecious about the naturalness of what he is drawing. If fag ends and condom wrappers end up in the leaves then, well, he draws them too. He told me that the piles of bits and pieces the he draws had, in part, been swept off the footpath by park-keepers. Humans are as much part of the natural world as magpies and hedgehogs, according to Mr Smith.

While his drawings create a space into which the numinous aspect of nature can flow, Mr Smith's intentions are more prosaic and, like his artist's name, self-effacing. His series of drawings have some of their roots in doodles, and draw into themselves remembered imagery of vegetation, growing into a project of photographing selected squares of ground and, in the studio, drawing what was captured in the stills. It is this unpretentious surrender to the humble subject-matter that enables Mr Smith to pull in, through tendrils of ink, the spirit of the undergrowth. To paraphrase what Robert Pirsig wrote in his classic book Zen and the Art of Motorcycle Maintenance, Mr Smith shows that “the Buddha, the Godhead, resides quite as comfortably in the crushed twigs and fag ends of Hyde Park as he does at the top of the mountain, or in the petals of a flower. To think otherwise is to demean the Buddha - which is to demean oneself.”

Mr Smith is not trying to make an artistic statement but, by letting his pen execute the lines that it wants, he is, in a Zen paradox, making a statement of art. 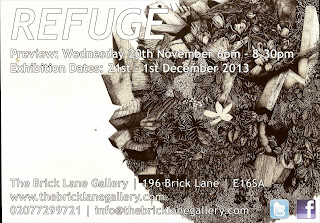 A second series of drawings hung in the Brick Lane Gallery are the surreal spheres of undergrowth and fragments of wooden material (Transition and Refuge). These ‘plant planets’ are more artistically stated, as they depict imaginary worlds rather than the prosaic world of Hyde Park (although they still have their tap roots in unselfconscious doodles.). They remind me of the floating islands of the film Avatar, which in turn hark back to the watercolour aerial islands that adorned Roger Dean's album covers for the 1970s rock group Yes. It was one of these drawings (Refuge) that The Brick Lane Gallery used as the front image for its publicity for this exhibition.

A final series is represented by a single, and singular, drawing of an eye, whose pupil is the eclipsed sun, and the iris a lattice strung with flowering plants, surrounded by dry and disintegrating fragments. Eyes Closed offers enigma in contrast to the naivete of the Hyde Park series. Although the complete picture looks like an eye, the title (“eyes” in the plural) points to a less direct interpretation: as the sun is eclipsed, the eyes of the living world are closed; and if the eclipse were permanent, the living world would crumble away. It is a visual hymn to the sun, upon which all life depends.