Awesome beyond words: the Fire Garden at Stonehenge, which was staged by Compagnie Carabosse (http://www.ciecarabosse.fr/) on three successive nights (10th-12th July 2012), as part of the Cultural Olympiad of the London 2012 Festival.  Music provided by O.R.L. (http://www.myspace.com/orl1), stones provided by our Neolithic ancestors circa 2500 BC, and currently stewarded by English Heritage. Visited on 12th July. With an entry charged of just £3.00, the attendance was said to be around 5000.

Dithering on the road to the fire: We were staying at the Antrobus in Amesbury, just two miles from the Henge, and when I bought the tickets, I thought we should walk that short distance. But we arrived late from London, and my travelling companions (a poet and a driver for the purposes of this exercise) were not so keen on the 45-minute walk on the busy A303. The barman at the Antrobus said there was free parking in a field near the stones. This was not my recollection from what I had read on the web site, but the majority view in our party was that local knowledge trumps anything I might have read on the internet, so we set off in the car, only to find nowhere to park, and so our driver dropped us off and went to find a verge to park on, but our way on foot was immediately blocked by officaldom, so we walked back to find our driver . But he had had to take the car back to Amesbury, so after a mile we couldn't find him and yomped back along the verge of the A303 toward the entrance to the event. Our dithering and meandering to and fro before entering the Henge seemed symbolic: it was like the limited vision we often use in mundane life in contrast with the cosmic vision of the stones.

View from afar: The magisterial stones commanded the plain and wore the ring of fire in resplendance like a woman adorned with a diamond necklace. Huge shimmering spheres of mysterious fire marked out the cardinal directions around the Henge. Only when we got up close did we find each sphere comprised a metal frame holding a matrix of terracotta flower-pots, each holding a flame rather than a flower. Whenever I see Stonehenge from a distance, I am immediately struck by its enormous, resonant power. This was no exception, but now the flames lay around it in bright, pagan-like tribute. 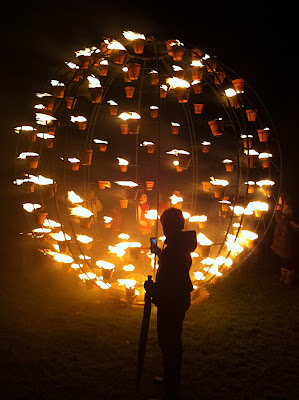 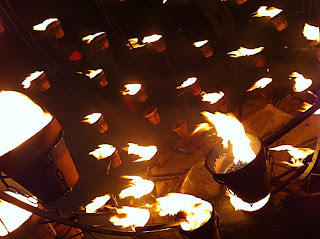 Scissors and sizzlers: We tried to set off up the A344 on the northeastern flank of the Henge but an official dressed in black insisted that we must clamber down the steep embankment into the muddy field, which quite frankly looked like a death trap in the darkness that was made impenetrable to human vision by the glare from the Henge fires. We were told this was because of the 'scissor lift' (which the poet in our party misheard as 'Sizzler', conjuring notions of some pyrotechnic Jabberwocky lying in ambush on the verge of the A344). By the time we had finished faffing around and trying to find our driver who had shot off back to Amesbury, the man in black was gone and we decided to brave the lair of the scissor lifts and Sizzlers.  In due course the beast loomed up on the horizon: harmless enough when handled properly but capable of dismembering anyone silly enough to try to climb it to get a view of the burning Henge.
. 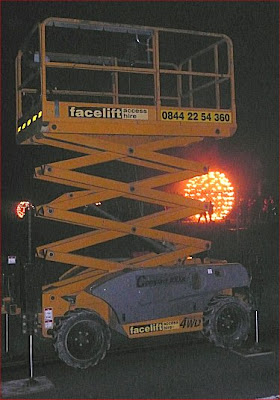 Entering the circle: I was sure that after our dithering, we had missed our 9 pm slot and would be barred entry. After all, modern life is hemmed in with petty bureaucratic restrictions. (Some time ago I was barred from New York's Ground Zero Memorial as I was one minute over my ticketed timeslot ...) I saw an open gate and we walked through. Nobody was checking tickets. Then someone called out from behind, "Excuse me, do you have tickets?", and I answered that I did and reached into the pocket to get them, but he waved us on, "That's all right, then." We were in. In fact, the officiating volunteers and staff were all supremely nice and polite. Occasionally, enthusiastic visitors would clamber onto the recumbant stones and immediately someone in a hi-vis jacket would call out, "Excuse me, would you mind awfully not stand on the stones, please!" We could walk among the stones, and hug them, but we had to show reverence by keeping our dirty boots on the ground. The fact that we could enter the inner circle and pass in and out of the trilithons was in itself amazing. This core part of the Henge has been roped off since 1978. (I first visited it in 1975, and have fond teenage memories of touching the incomprehensible megaliths.) Just to walk among the stones would in itself be worth making a nocturnal visit and paying three quid, but ... we had the astonishing Carabosse firepark all around us too! So, we crossed over the outer ditch, which was dotted with single firepots, and into the energetic 'turbine hall' of the ancient powerhouse. 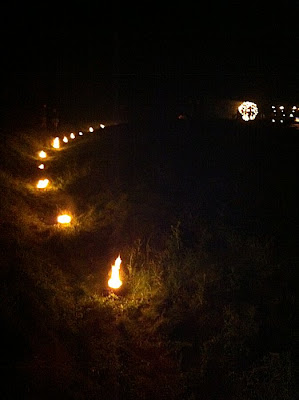 Fire installations: There were several types of fire installation, all hand-made by the ten men and women who make up the Carabosse collective, based in St Christophe-sur-Roc, a remote village in France. The biggest and most visible were the balls of fire. These comprised rigid steel hoops adorned with chained slots into which terracotta pots were placed. (I call them flowerpots as that is their appearance, but in fact they are purpose-built by Carabosse as firepots.) Each pot contained what seemed to be a large rag wick immersed in some kind of combustible oil. They made a biomorphic slurping sound as they burned. 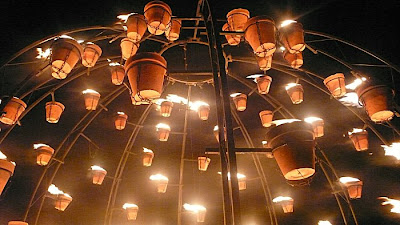 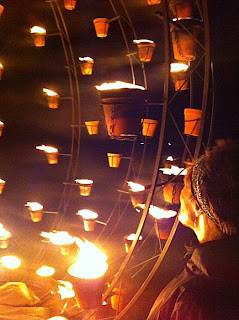 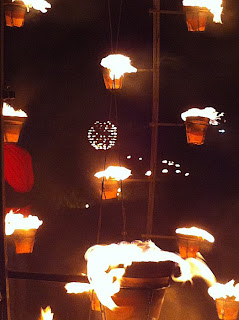 Next were the fire toadstools. Each one consisted of a plate of what appeared to be slowly burning coals, on a stand raising the burning mass up from the ground. They gave off a lot of heat, which visitors gathered around to keep warm, especially as the cold night wore on. 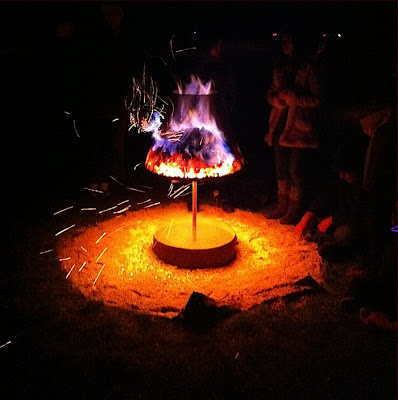 Looking down into the fire toadstool: 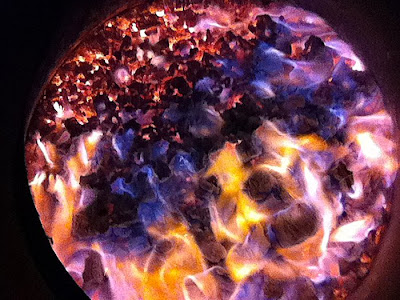 In the breeze, sparks flew into the air, tracing the flowing air currents: 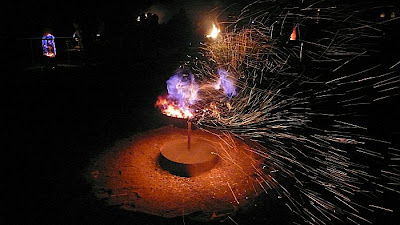 What's next? The fire trees (not fir trees, nor are they etymologically related): metal columns with a fre in the root chakra. Strange symbols and writing appear on the phallic stem of the fire trees.

The most complex of the fire installations was the fire harvester: a big wheel manually harvests fire from its belly spurts it out from its chimney. 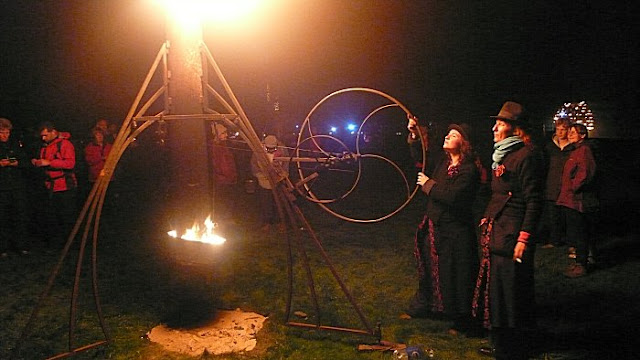 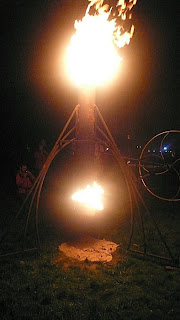 Outside the sacred circles is the fire gardener: 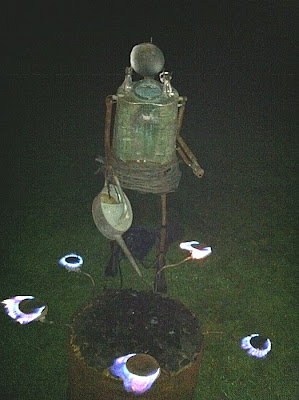 In front of the trilithons were the mechanical cyclists: a completely surreal and dreamlike idea: metal stick-people perpetually cycling and going nowhere but casting rhythmic shadows on the stones: 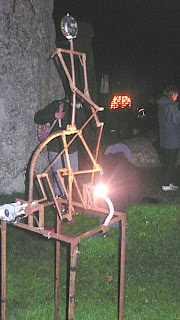 Some of the installations may, such as the cyclists, may seem very silly and not in keeping with the grandeur of Stonehenge. And yet ... one senses an implicit undertone of deadly seriousness.  I am not saying there is anything sinsiter about the metal cyclists, but there is a darkness in the starkness. ﻿This ain't no funfair. It is almost as if the cyclists and the writing on the fire trees are all a sham to keep ignorant eyes and minds away from what is really going on. -- which, if I may hazard a guess, is a recharging of the stones with fire. Like ancient fertility rites such as the maypole dance, there is a deep, dark, sexual current of energy that is inevitably conjured up by setting up fire-breathing phalluses around a megalithic temple.

Soundscape: Permeating the whole evening was the extraordinarily spacey and trancilicious music and voice of O.R.L., ﻿otherwise known as Aurélien Rotureau (France, b. 1979).  He had studied electroacoustic composition at the Conservatory of Bordeaux graduating with first class in 2001, lived in Montreal and Brussels and released a disc under the name Amodio, on the label Metak (http://www.musikametak.com/). In 2005 he founded with other artists, the collective "Matekemata" (http://www.matekemata.com/). And, in 2007, he went to Barcelona and started composing music for the fire installations of Carabosse. At the Stonehenge gig, he sat in a quadrilateral metal pergola and delivered a hauntingly atmospheric soundscape and filled the whole space. Why nobody was dancing, I can't explain, as much of it was eminently danceable. I suppose everyone was as cold as we were. To listen to his music, go here: http://www.myspace.com/orl1 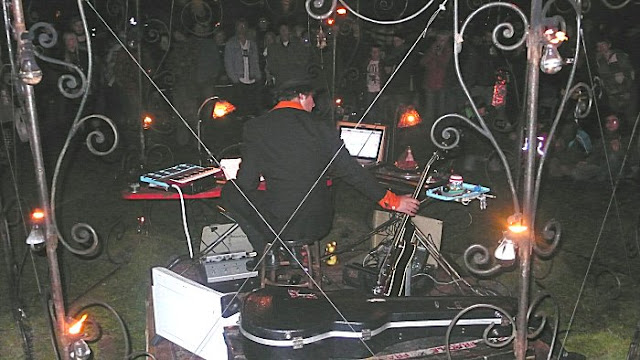 Thsi was an extraordiary event. Although its nominal role was entertainment for the Cultural Olympiade, I am sure it was also breathing a spiritual life back into the Henge and the attendant key-lines.

Carabosse will do one more event in the UK on this tour, 20th-22nd July in Milton Keynes.

Special thanks to Mary Lynne Evans and Eric Evans, my guests from Seattle, who were staying with me through AirBnB, and kindly drove us to Stonehenge: 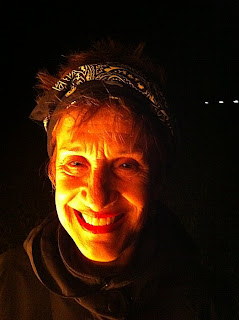 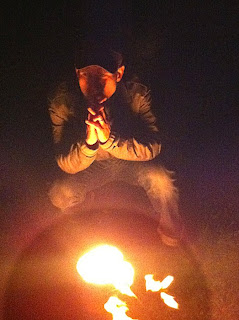