All art is equally illusory, but some is more wittily and self-reflectively illusory than others.  The French sculptor-painter Alban (b.1967) has a genius for creating a visual and tactual sense of something that is not really there. His painstakingly sculpted and painted segments of aircraft fuselages, cut by acetyline torch from the hulls of decommissioned aeroplanes, have all the weight, the lustre, the jagged edges, the scrapes and scratches of working life ... but they are made of wood. The illusion is uncanny. At first, you cannot believe the work is not metal. Viewers at the gallery peer closely at the edges, trying to find a visible clue, a proof that it really is just painted wood. Even when you have convinced yourself, as soon as you step back, the illusion kicks in again. 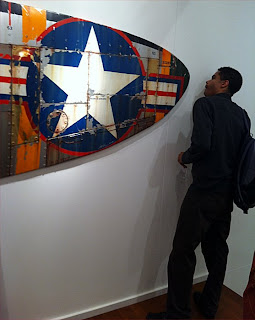 They are sometimes life-sized fragments of huge metal hulks, usually aircraft, but Alban also paints segments of ships and trains. Some are miniaturised, such as the aircraft wing seen here ("Highway to Fly", 2012). The other Alban work that was on show in the French Art Studio at its Grand Opening last night was more like life-size ("Legs", 2012). But you are so taken up in the illusion, and basking in the warm glow of distressed, vintage metal sheeting, the aura of lived-in and worked-on physicality, that the question of size does not enter your mind. 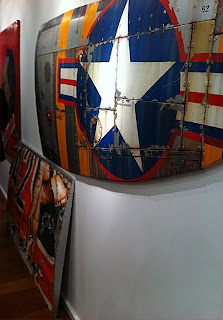 The pieces are all quite thin, and suitable to be hung on a wall, as we see in this snapshot where the vintage paint schemes of Alban's sculptures compliment the derriere of the elegant Caroline Le Luel, proprietor of the French Art Studio. 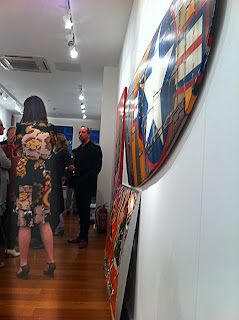 The elegant historicity of Alban's aircraft was nicely accompanied by a string trio led by violinist Agnes Daniel, Vivaldi's smooth movements melding with the aerodynamic shape of the wing.

The use of the city as a canvas was a common theme of several of the artists that Caroline had selected for the opening. Jef Aerosol (b.1957) and Yz (b.1975) create large graffiti on urban streets.  Usually more painterly than Banksy's hard stencilled graphics, they have slower and more arty effect on the mind. While Banksy's graffiti gives you sharp slap in the face, the works of Jef Aerosol and Yz will dance with your aesthetics in a more ambivalent semantic space. Graffiti artist Sun7 (b.1977), pronounced in the French manner as "sunset", incorporates lexical elements into the stenciled artwork, which gives it a redolence of Arabic art, in which the writing itself is integral to the visual experience.  His work "Mao" was being shown that evening, but I personally would have preferred his other pieces such as his untitled skulls..

More witty, but less accessible to the popular imagination, is the work of l'Atlas (b.1978), who paints enigmatic labyrinths on the ground and on the walls of the city.  These geoglyphs and muraglyphs seem to speak the very language of the city's subconscious mind, mirroring the abstract road signs that shepherd the denizens of the city, or the corporate logos that mark out territorial space in the cityscape.

Obviously unable to bring the city into the gallery, Caroline has hung smaller simulacra of the works of Jef Aerosol, Yz, and l'Atlas.  Fernando Costa (b. 1970), on the other hand, does bring the city into the gallery! He has sliced and diced metal street signs, railway signs, any kind of urban signage, for wayfindng and for other purposes, and rearranged the segments of signs into a patchwork quilt of metal shards. Living and working in Sarlat in the south of France, he repurposes the informatic tentacles of the city that penetrate the countryside in the form of road signs. Paradoxically, Costa is the diametric opposite of Alban: while Alban sculpts and paints with wood and resin to create the illusion of cut metal, l'Atlas uses cut metal as his medium. The contrast is fascinating to mull over. Perhaps in some future re-hang, Caroline could hang the metallic and faux-metallic works of Costa and Alban side-by-side.

I've spotted Caroline Le Luel's stalls in various art shows in the London in recent years, and she now has a permanent gallery space, French Art Studio, at 58 Gloucester Road, London. Should be fun.
http://www.thefrenchartstudio.com
Posted by Peter B Lloyd at 3:15 PM