The eminent theoretical physicist Richard Feynman famously found followers of the arts to be "dopey". He thought that the arts were a good idea, it was just a pity that the pracititioners and scholars were so dopey. (The arts people got a better reckoning from Feynman than the philosophers did. To him, the entire philosophical enterprise was dopey in principle.) To be sure, Feynman's own notions were sometimes pretty dopey themselves -- such as his idea of particles flying backwards in time. But my intention here is not to challenge Feynman but to draw your attention to how pervasive his view was that the arts were unworthy of serious consideration. Having spent six years in a university engineering department, and six years in a science research department in another university, my firm impression is that there is a very widespread conception of art as an atheoretic field devoid of any fixed principles of valuation, where anything goes, and which is governed by gullible fools who accord inappropriate levels of attention and funding to pretentious activities that really just amount to larking around. On this view, art is just stuff that you put on display, and its only merit is to be clever and fun. The more clever and the more fun, the better.

The Kinetica Art Fair in Marylebone, London, is a crowded display of very clever devices and toys, most of which are great fun. This is an engineer's vision of what 'good art' should be.

This Fair necessarily has its roots in science and engineering because scientists and engineers are, in general, the only people with sufficient grasp of the workings of the physical world to get this kit to work. In contrast to a real art fair, it is pervaded by a sense of flippancy rather than pretentiousness. These devices are not purporting to make a statement about the condition of mankind, or to make knowing self-referential allusions to impossibility of art's saying anything to the postindstrial spectacle. They are just meant to be fun. Mind you, the movies screened at the Fair's mini-cinema are clever only, not fun: in fact, all the ones I watched were soporifically boring, maybe because the film makers were trying to be artsy rather than having fun like the makers of machines were.

The only exception I found was the stall that I actually came to see: Lucia No. 3, the Lucid Light Stimulator (www.kinetica-artfair.com/?exhibitors/2012/lucia-3.html). This is a device made and promoted by Light Attendance Gmbh (www.gesund-im-licht.at) in Austria. It was developed by Engelbert Winkler and Dirk Proeckl, who had both come from Austria to discuss it, along with Maria Lopes, who is based in London (www.TravellerUnlimited.com). 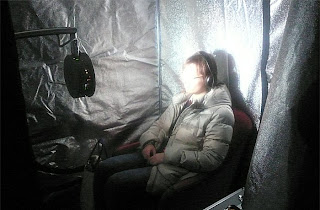 In principle, it is very simple: it flashes strobe lights in your face, and you watch them with your eyes closed. This induces the well-known 'flicker phosphene' effect. How the brain responds to this varies between individuals and between occasions, but it is common to see the 'form constants' that Heinrich Klüver first reported in the 1920s. It is well known that these are induced by psychotropic substances and many people (eg the late Terrence McKenna) have suggested that they form the foundation layer on which full hallucinations are built.

At the time, I was completely convinced that the machine was shining coloured light. (Well, I had my eyes closed, so I couldn't check ...!) But later, in an email, Maria assured me that only white light is used. I am quite astonished by this as the colours I saw (with my eyes closed) were as clear and vivid as they could be. The shapes and forms were constantly changing but sometimes individual colours would persist for several seconds. And even when the colours were shifting it really seemed as if I was see bright coloured lights through my eyelids. In retrospect it is a bit spooky that those colours were hallucinatory.

I experienced some quite interesting visuals -- for example, spiralling chess-board patterns in which half the squares were bright green and the other half cut awayto reveal a jungle-like scene of tangled chaos. Most of the visuals were grid- or spiral-based. Occasionally I had momentary glimpses of some more naturalistic pictures of desks and office furniture. I sense that one has to enter to into a relaxed and receptive state of mind to get the full images. I am sure I need more than the few minutes on offer to go deeply enough. Maria is arranging sessions for people after the fair ends, so I hope to have a crack at seeing more substantive hallucinations ... 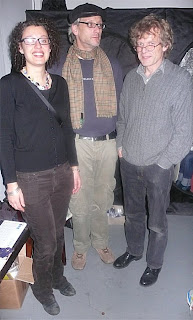 Snapshot of (left to right) Maria Lopes, Engelbert Winkler, and Dirk Proeckl standing in front of Lucia No. 3.
Posted by Peter B Lloyd at 9:39 PM